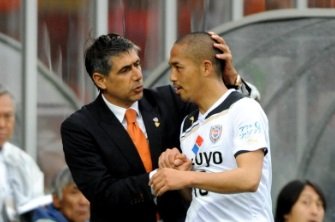 In my last piece, I wrote about my visit to Shimizu S-Pulse, in 2011, Afshin Ghotbi’s first season at the helm of the club. Last week, I had another rare privilege to visit with Afshin and learn from him, only this time, at the conclusion of his tenure at S-Pulse. It was a fascinating glimpse into the process Afshin takes his staff and players through, in order to prepare for a match.

During my visit to S-Pulse, I got to see the finished product of a training session, but more recently, I got to see the nuts and bolts of the process of team preparation. During Ghotbi’s recent visit to southern California, he was gracious enough to visit the youth coaching staff at Eagles SC in Camarillo, an elite youth club, run by none other than former MLS Cup and Open Cup Champion, Steve Sampson. It was very refreshing to see that a top caliber, international manager like Afshin would make time to do a presentation for youth coaches, and spend time answering their questions, in a very intimate and open setting. It shows how genuine Afshin’s football and personality have remained through the years, never losing touch with his roots in the game, and never losing respect for those in the craft, regardless of their level or status.

The audio-visual presentation was the quintessence of modern management methodology. With regards to content, it could have drawn top-billing at any international coaching symposium; but, as I mentioned in my previous piece, Afshin Ghotbi is not just knowledge and organization. He is an excellent communicator. He has a knack for packaging an idea or a goal into a series of visuals, which paint a clear picture of roles, responsibilities, and function.

On the technical side, it was impressive to see how information and data from opposition scouting reports was married into tactical field diagrams, to give players and staff not only a visual of how an opponent functions, but an idea of when they actually hit peaks and valleys of performance within a 90 minute match. Equally impressive for its attention to detail was how, even the physical height of opposing players factored into diagrams of set pieces. Frankly, the only detail about opposing players that was not in the slides was their sign of the zodiac!

When it came time to preparing the staff for training sessions, I was especially enthralled, since my job as a coaching educator is to improve the quality of training that coaches are able to produce. I’m a big fan of diagrams, but Ghotbi added a whole new dimension to the art. Each activity of the practice session was laid out with painstaking details, with regards to spacing, timing, duration, and players involved. Nothing was left to chance or random act. During my actual on-field observations, I noted how impressive the intensity, sharpness, and flow of the sessions were; now I understood why. The economy and high productivity of the training was a direct result of the meticulous staging, planning, and delegation that the manager prepared for his staff. Not one to spare a detail, he even required players to check in with the staff more than an hour before training to make sure that proper adjustments could be made to ensure that the right combination of players was able to be maintained to maximize awareness and tactical effectiveness.

Last but not least, in terms of the psycho-social side of the game, again, no detail was spared. Afshin showed he is also a fantastic motivator. Players were encouraged to view videos of positive performances in specially designed screening rooms, one of many technological innovations he brought to the club. Video clips and pre-match movies were interwoven with specific messages and goals for each and every match. One could sense that preparing for each successive match under Afshin was a new adventure, a new mission, as he likes to put it; and that ensures that the group can never go into a downward spiral of performance, even in the most adverse of times. It’s no coincidence that S-Pulse was able to stay in the top half of the tables and reach a cup final, with so small a budget, and with so many young and inexperienced players. As I said before, this is a testament to Afshin Ghotbi’s ability to ‘man manage.’ No matter if there were seasoned international veterans or newly promoted youth academy players in the side, each not only knew his purpose, but ‘believed in’ it and went out and lived it on the pitch and bled for his teammates.

In a day and age in which so much is made of ‘the acquisition of talent,’ and ‘big summer signings,’ Afshin is both a throwback to a bygone era and, at the same time, a glimpse of the future of the game. He has the core principles and tireless work ethic which built the modern game, yet at the same time he has the global outlook and tech savoir faire that is now at the cutting edge of coaching.

In every sense, Ghotbi is ‘modern football’ at its best. In my view, he would be the perfect choice to manage a progressive –minded MLS club or a top domestic European club, looking to break barriers and reach a new peak of performance and results. His innovations have been widely imitated already in Asia, but would have an even greater ripple effect here in the U.S. where our top league is in desperate need of a new standard of management in order to better serve and develop our players. With a manager like Afshin Ghotbi in the MLS, Jurgen Klinsmann could rest a bit easier that his top picks would be in good hands on a daily basis here at home.